of the “World’s Smartest Dog”, Jesse, the Jack Russell Terrier;

Jesse loves helping out around the house; while having a great time in the process =o) 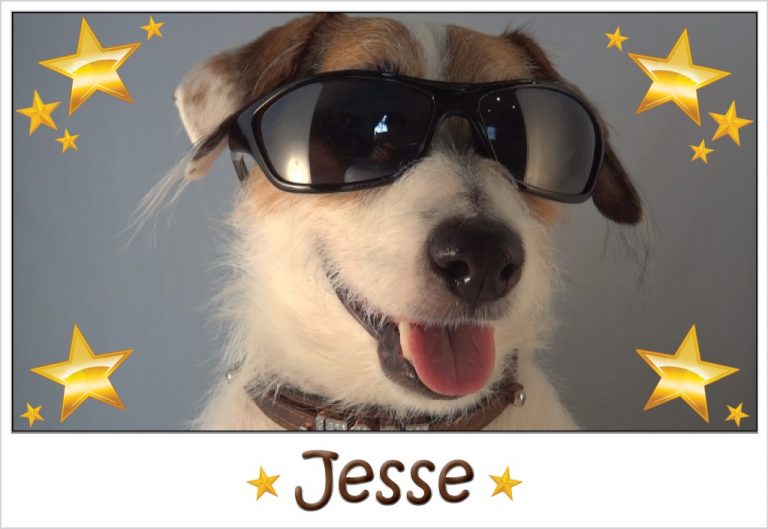 Want to learn more about this little guy? Then you’ve come to the right place. From appearances and tricks, to Jesse’s adventures and adorable antics that will leave you smiling; we’ve got you covered on all things Jesse.

***Our website is currently under construction, a huge update is in the works for new pages and updated information; all about Jesse! Stay tuned :)***

Jesse gets a baby brother, side-kick, and partner in crime: Jake!

It’s official! Please welcome home Jesse’s baby brother, Jake ❤ We flew out to Florida to pick him up, and had so much fun visiting the beach and seeing where he grew up! We are now charmed with the power of three~ Jesse, Jake, and me 😉

I picked out Jake from a picture, the first day he was posted – he was the first of his litter to be adopted! When I saw him, I just knew; this little guy was meant to join our family!

Little Jake came from Butterball Kennel and I can’t believe how much love, socialization, care, and health testing went into him before I got him.

He loves everyone, dogs and people alike, and isn’t fazed by anything! He loves cuddling up to Jesse and following him around. He wants to be just like Jesse! ❤❤❤

We can’t wait to see Jake grow and see the many things he will learn from Jesse; and so a partnership and journey began

Jesse does all kinds of cool action in this one, and yes, he does all of his own stunts 😉

Jesse’s 1st Leading Role, Feature Length Movie “A Doggone Christmas” is out on DVD and is a Classic for any month of the year. 🙂 Jesse plays “Murphy” a talking dog who escapes CIA officials who have an order to bring him back so they can test on him to find out how he can talk. With the help of two brothers and their group of friends; they try to keep him out of harms way. You’ll have to watch the movie to see how it ends. 🙂

Jesse performs 35 amazing dog tricks including a walking hand stand, somersaults, driving a motorized car, blowing bubbles under water, playing the piano, and walking backwards (among many others!)

A Dog’s Life, Jesse lives Life to the Fullest!

What can be accomplished with great nutrition? Almost anything!

Sit back, grab a cup of coffee, and enjoy your visit.

**Jesse’s website is still under construction. NEW Jesse stuff will be added periodically, so make sure to check back to catch all of Jesse’s adventures**

Want to contact Jesse about an upcoming Project? Send us an e-mail at: